The level design is mostly complete for the new areas, but there's still some scripting and lots of dialog to be done, so it'll be a couple more weeks. Alongside working on the new content, I'm also doing major re-balancing of some game mechanics in order to improve the game economy, both in monetary sense and in other aspects. I'm going to talk about the former now and we'll leave the latter for another dev log. 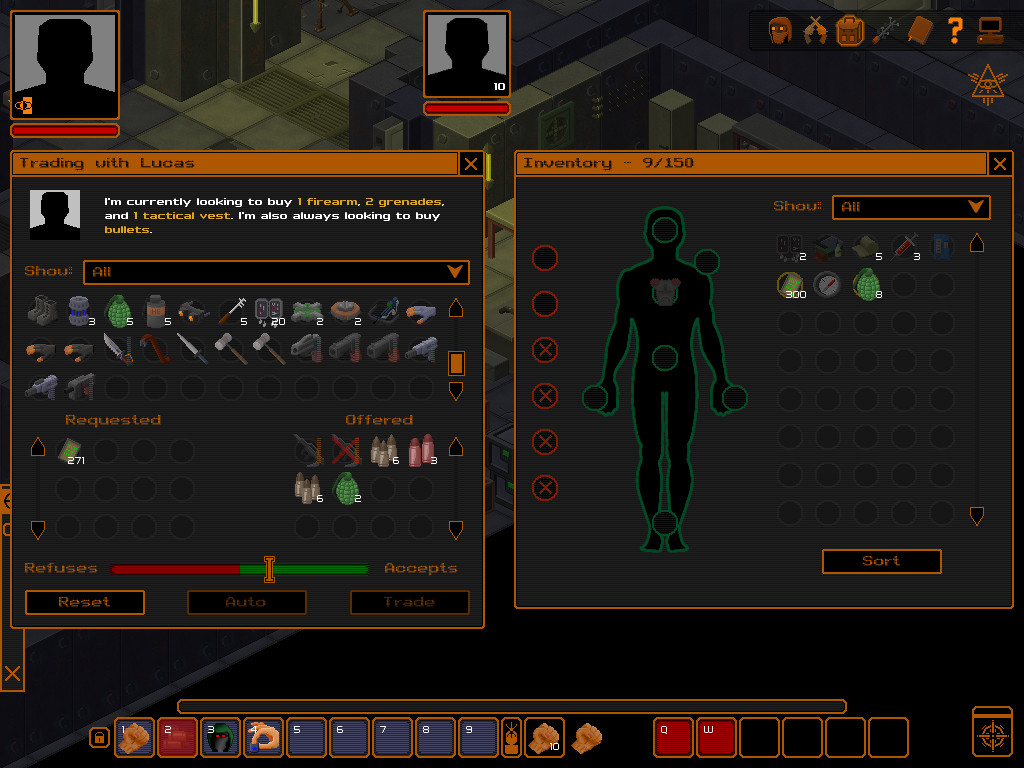 The first big change I made is I limited the type and amount of goods merchants are willing to buy from you. Merchants will now only buy certain type of goods depending on what their store deals in and they will require only a certain amount of each, with exception of certain goods they will always be looking to buy (such as bullets for example). The type and amount of goods they require at the moment is randomly selected from that merchant's "market demand table" so to speak and it's reset every time the merchant restocks their inventory (typically every 90 minutes). So you will no longed be able to sell all the junk you hauled from your latest raid to the first merchant you see.

And speaking of hauling junk, I've also implemented item weight system. You'll get the progressively higher movement speed and movement point penalties the more you carry above your capacity and if you carry way too much you will actually get rooted into place. This is something I've put off implementing for quite some time because I wasn't sure it'll actually add any value to the game. I dislike these mechanics in most RPGs, especially the party-based ones because more often than not they only result in more inventory management chores without having (or needing to have) much impact on the game economy. But in certain games where exploring and scavenging are the main concepts of the game and where economy actually matters, and I believe Underrail to be such a game, I feel that liming the player inventory in some way (either through weight or space) is beneficial to the overall gameplay experience.

And finally, to go along with these changes, I've reduced the price multiplier when purchasing items. I'ts currently at 175% (down from 350%), but might change further by the time the update is ready depending on how it works out when I get the time to do a real playthrough. I've also reduced the item durability penalty to its cost and have increased the durability range of items looted from corpses (they won't be near broken all the time now).

So why all these changes? Well here's my take on it.

The way the economy works in the live version of the game is like this: loot everything, get every piece of junk. No matter if you need it for crafting or not, no matter the price, just as long as it can be sold - pick it up (basically always hit "loot all" on every container). The more people you kill, more loot you get which directly translates into more wealth so you're always encouraged to handle every situation by killing as many as possible. And if you do not play like this you will get way less loot, and because the merchant prices and item durability penalties are balanced more towards this "optimal playstyle", you can easily run into money problems.

In the new system, you'll only want to hold onto the valuable stuff and the stuff you actually need (for crafting or consumption) because you can carry a limited amount and because can only sell so much in a given time frame. You might wonder won't the weight system just encourage power gamers to make multiple trips to a dungeon to get all the stuff out and store it somewhere to be sold later when the market demand resets? Well, they can do that, yes, and it will work to a degree, but in the time it takes to make multiple trips to the same (possibly remote) place you can do more fun stuff such as exploring new areas, doing new quests, gaining XP and by doing this, you will also get new loot to sell for when the merchants reset.

There will still be more efficient and less efficient ways to make money - it is not my intention to try to prevent that. Accumulating wealth is one form of power gaming and for a lot of people power gaming is one of the major motivations for playing RPGs. I believe this new system will be more fun to play with for everyone. People who want to get as much money as possible will now try to find the most expensive stuff to sell as opposed to as much stuff, while those who take the more casual approach to the economy won't be left hopelessly behind either just as long as they scavenge intelligently.

In any case, let me know how you guys feel about these changes.