Originally I planned to add traps to the alpha demo but ended up postponing that to get the demo out earlier. They're in now, though. 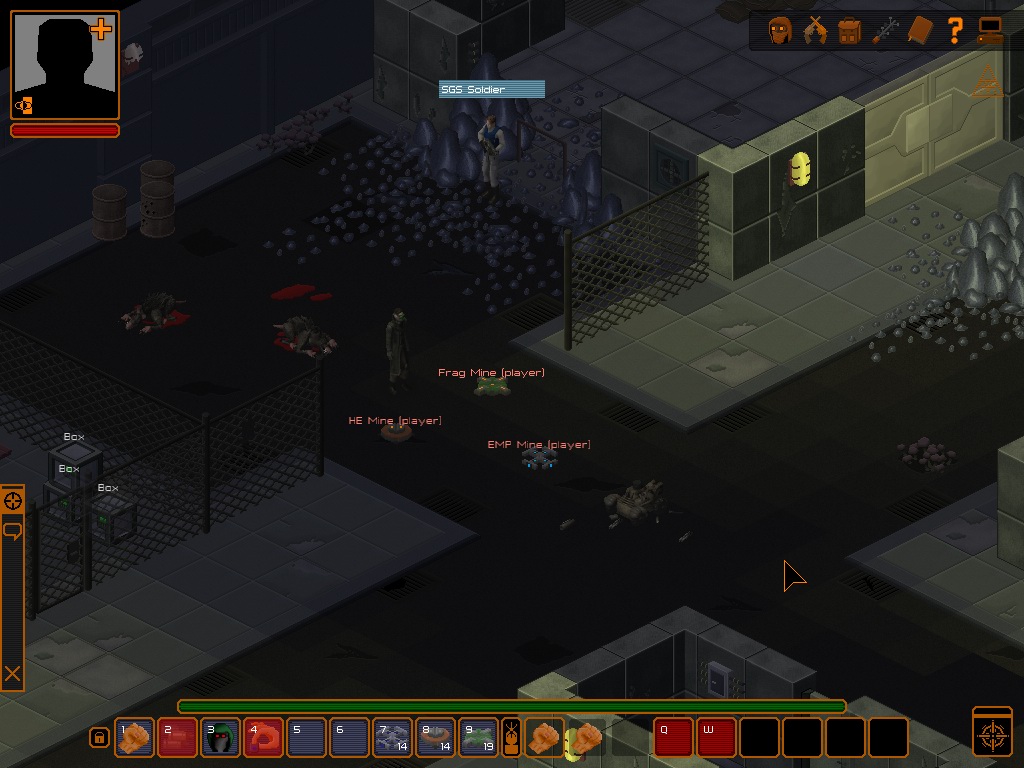 There are currently three types of land mines you can rig up: frag, high-explosive and EMP. When they're triggered they have same effects as their grenade counterparts. You can also craft these yourself if you have high enough chemistry/electronics. There will be more traps in the future and not all of them will be mines.

Except rigging up the area before a battle and luring your foolish enemies into minefields, I figure trapping will also be very useful in eliminating patrolling enemies. At least those not skillful enough to spot and/or disarm your traps.

I was thinking of how the game should handle player criminal behavior such as murdering people through various means. And more specifically, I thought about how NPCs should react to you placing traps everywhere and turning their private quarters into mine fields.

I want to prevent exploits such as carpeting an area with traps and killing off high level non-hostile NPCs in the middle of their home base without triggering hostilities and then promptly looting their kickass gear. But on the other hand I want to sometimes allow player to use traps as an assassination mechanism where it's actually appropriate as I think that can be a lot of fun. Ideally the NPCs would be very smart and once a trap has been set off they'd start an investigation and look for a culprit, etc. However, Underrail is not a simulation game and that kind of AI programming is way out of the scope of the game.

So I went with a simpler solution which is to tag each area with certain control level - full, partial or none, which indicates how safe it is for the player to mess around with traps (and in the future murdering, etc) and how the controlling factions of the area will react to your shenanigans.

The UI shows the zone control indicator in the upper right corner and you can mouse over it to see what sort of action you can get away with and what is too risky in the current area.

As far as traps are concerned:

One thing to keep in mind though that regardless of the zone control level, if you try placing traps too close to someone, they will take offense, or at least disarm them if they have appropriate skills.
← DEVLOGS
DISCUSS ON FORUM