Hi guys. In the past few months we've been working (and we're still working) on a couple of major features for the expansion, but we didn't want to show any of them before they were ready. First of these that are now done are the new weapons, so without further ado I give you the three new weapon types - the spear, the machete and the shotgun.

The choice of spear and machete as new weapons was mostly thematic (you will learn why in some later dev log), but these weapons will also have their own place in the melee arsenal. Spears are meant to be versatile offensive and defensive weapons, while machetes are meant to be high risk-high reward weapons that will rely on the user keeping up the offensive. More on the exact mechanics of this will be revealed later when I get to implementing their specific feats. There are two types of machetes that differ slight in critical chance/damage stats. 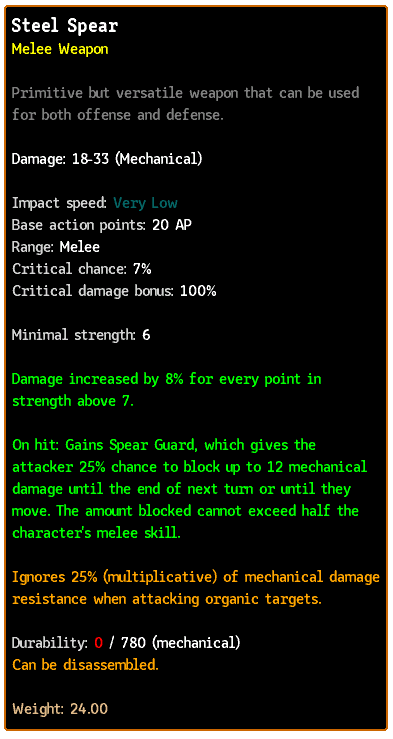 Now the interesting one of the bunch is the shotgun. I say this because the mechanics of the shotgun are unlike anything else that we had in the game so far when it comes to weapons. When a shotgun is fired it launches a number of pellets that may hit the intended target, some other target in the attack cone or might miss completely. So the chance to hit with the shotgun is not so much indicative of weather or not you'll inflict damage on the enemy, but how much of the damage you launch their way is going to land on the primary target.

I'm going to give you some random shotgun stats below, but keep in mind that this has not be properly balance tested and that before we get a chance to play around with this new weapon a bit it's hard to gauge it's effectiveness and what the numbers should be in order for it to fit into the role intended for it. There is a lot of factors that come into play here depending on the situation and it will take some time to make sure they perform as expected at different ranges (medium, close and point blank) and against different enemies (low armor/high armor). By the way, pay attention to the interaction with the different ammo types when considering the raw damage stat.

I've also implemented the ability for weapons (and gear in general) to grant you special attacks and abilities so expect more of that in the future.

The process of adding these new weapons took a long time because we had to change the way we handled animations of all the different human models and it required a lot of manual labor to get things in order. However, now that we have done this, it will allow us to add more new weapons in the future (not in this DLC, though), to which we are rather looking forward to. I'm not gonna lie, we already know what weapons we want to add in the future, so just keep that in mind when you're posting your wishes.

Anyway, let us know what you think of the new weapons.